How to root my phone or root phone is the common question where every one searches and also for easy root android. Android is an operating system which is used by many of the smartphones but these does not have the complete access for the device, so to have the complete root access rooting has emerged. Rooting is a simple procedure which crosses its limitations and gets the full access to the operating system. There are many tricks to root a device. But a typical question may arise “how to root android without computer”. This post gives a clear picture to that question and also you will get the simple ways to root android without PC.

Before knowing how to root android, you must know some terms to get the full idea about root my android. In this rooting there is no effect on the memory and more over you can use the latest android operating systems like android kitkat 4.4.4 or android 4.4 kitkat with the root. We can even increase the smartphone processing speed by customizing the ROM. Or else even if you root your device it speed increases in some cases.
Must See: How to unlock android phone

The Best way to root software for android is the Framaroot, its a simple smartphone app which can root all the android devices without any computers/pc.  Actually this app was developed from the XDA forums, which installs SU binary for mobiles. This framaroot app supports android 2 to android 4.2 versions.

—–>After downloading the app, move it into the internal memory in a folder.

—–>In case if you have downloaded the file into a computer, then you need to move the apk file to your smartphone, you may use android pc software.

—–>After moving the APK framaroot file, install the particular apk file. While installation it will ask for an action after root, in that choose superuser.

Select an action to execute after root
Install Superuser
Select an exploit
Aragorn  Gandalf
—–>You can select any one of the exploit in the application of your choice. After selection wait for some time until the installation gets completed. Later you will get a success message on the display indicating that rooted app is successfully installed.
Success… Superuser and Su binary installed
—–>Now reboot the system to complete the process of Rooting Android. 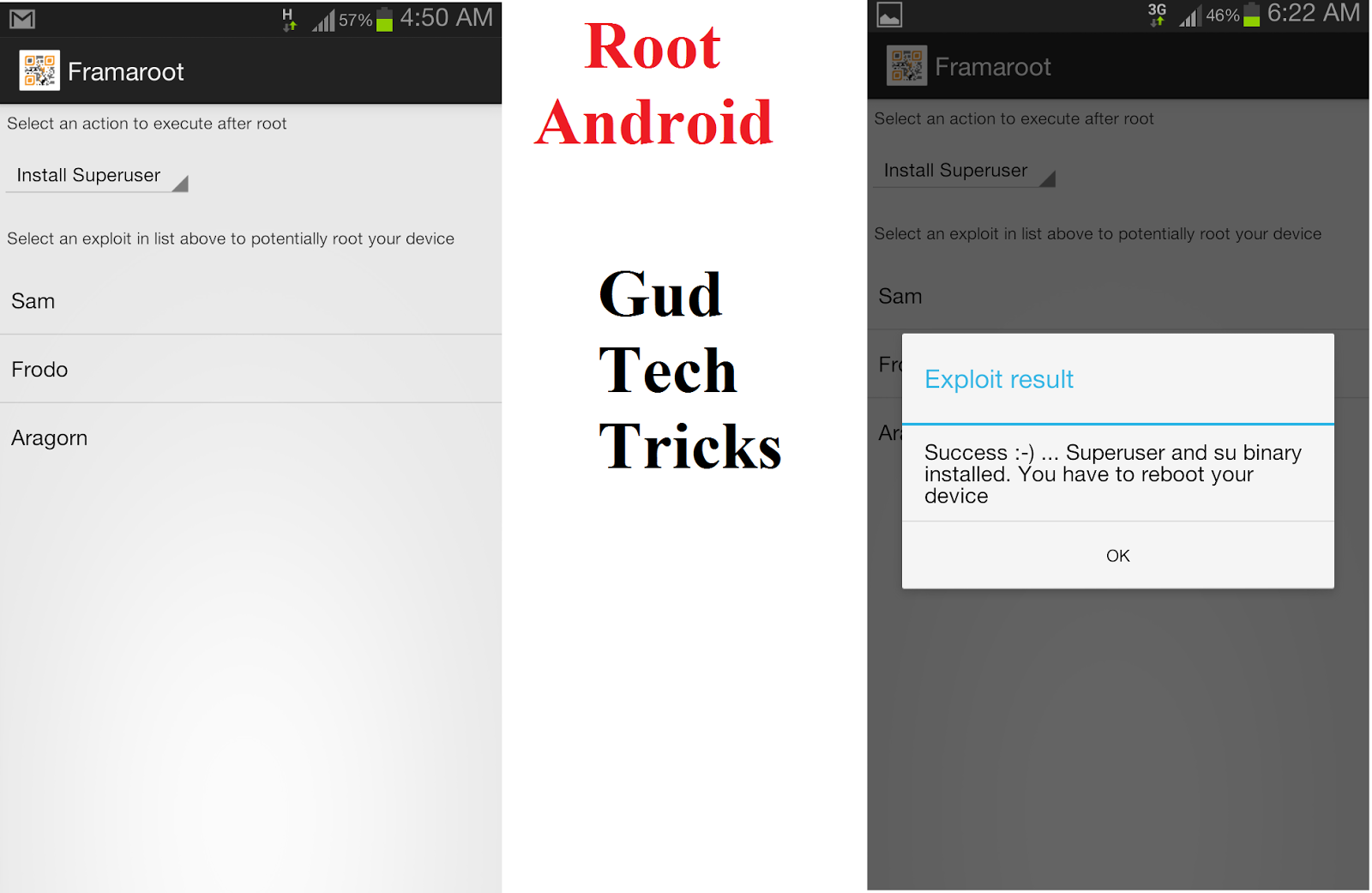 Androot is the simple app that will be helpful in rooting the android mobile by downloading and installing the app without using the pc or computer. To get the android app on pc first go to settings option and select the application option. Download this app and install it.
Android root supports these Google GI, HTC Magic, HTC Tattoo, HTC Hero, Motorola Milestone, Motorola ME511, Motorola XT701, Motorola XT800, Motorola Charm, Motorola Droid, Sony Ericsson X10 Mini, Mini Pro and X10, Acer Liquid, Acer beTouch E400, Samsung Galaxy Beam and Galaxy 5, Lenovo Lephone, Vibo A688, LG GT540, Gigabyte GSmart G1305
Using this tutorial you now got how to root software for android, in case if you have a doubt whether your device is rooted or not, then you can verify it by using the checker app its for free and no need to pay any bugs for it you just click on the below root check.
“Root Checker“
Click on the Root checker to check whether your android device is rooted or not. Better to check in this before proceeding on to the next. Once you have any thing wrong, then do the root checker again.

Hope now you got the simplest method to root a mobile, this is applicable for all the operating systems of mobiles, even for rooting android tablet you can use the same above procedure. If you have any queries regarding the rooting comment below and share with us!!!!!…..